Warning: "continue" targeting switch is equivalent to "break". Did you mean to use "continue 2"? in /home/drbaitnp/centennial.drba.org/wp-content/themes/Divi/includes/builder/functions.php on line 5892
 Our Founder | DRBA 
Warning: Use of undefined constant APWPULTIMTE_VERSION - assumed 'APWPULTIMTE_VERSION' (this will throw an Error in a future version of PHP) in /home/drbaitnp/centennial.drba.org/wp-content/plugins/audio-player-with-playlist-ultimate/includes/class-apwpultimate-script.php on line 43

Born in 1918 into a peasant family in a small village south of Harbin, in northeast China, the Venerable Master was the youngest of eight children. His father’s surname was Bai, and his mother’s maiden name was Hu. His mother was a vegetarian, and throughout her life she held to the practice of reciting the name of the Buddha Amitabha. When the Venerable Master formally became a Buddhist, in his mid-teens, he was given the Dharma name Anci (“Peace and Compassion”), and after becoming a monk, he was also known as To Lun (Dulun — “Liberator from the Wheel of Rebirth”). Upon granting him the Dharma-seal of the Weiyang (also pronounced Guiyang) Chan lineage, the Elder Chan Master Xuyun (1840-1959) bestowed upon him the Dharma-transmission name Hsüan Hua (Xuanhua  — “Proclaim and Transform”).

In Los Angeles, on June 7, 1995 at the age of 77, the Venerable Master left this world. When he was alive, he craved nothing, seeking neither fame nor wealth nor power. His every thought and every action were for the sake of bringing true happiness to all sentient beings. In his final instructions he said: “After I depart, you can recite the Avatamsaka Sutra and the name of the Buddha Amitabha for however many days you would like, perhaps seven days or forty-nine days. After cremating my body, scatter all my remains in the air. I do not want you to do anything else at all. Do not build me any pagodas or memorials. I came into the world without anything; when I depart, I still do not want anything, and I do not want to leave any traces in the world. . . From emptiness I came; to emptiness I am returning.” 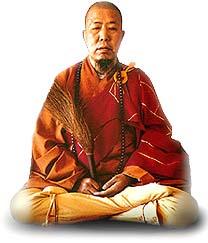